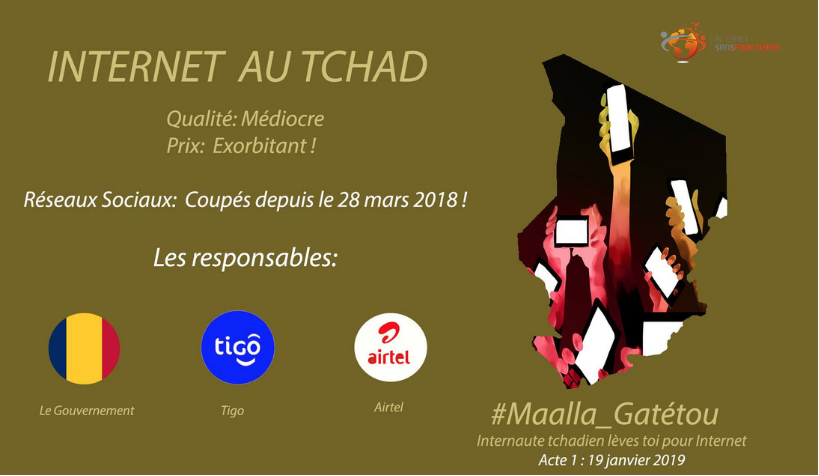 Internet Without Borders launches an international campaign against Internet censorship in Chad, to act against the blocking of social media and the high cost of Internet access in this landlocked country located in Central Africa. Deployed online and offline, the campaign will begin on January 19, 2019 with demonstrations in Paris, N’djamena, a fundraising to purchase VPN access for Chadian Internet users, as well as discussions on social networks on the hashtag #Maalla_Gatétou (note: why did you cut off, in Chadian Arabic), and on Facebook. Every month until June 2019, new actions will be proposed.

Chad is among the worst states in the world with regards to respect of digital rights. Since the disputed re-election in April 2016 of President Idriss Déby, who’s been in power for 29 years, more than 400,000 Chadian Internet users are regularly deprived of normal access to the Internet and social media for political reasons.

In addition to this State censorship, high costs of access to the Internet, and poor quality of the connection are imposed by the telecommunications companies. After a campaign led by Internet Without Borders Chad, the cost of 1GB of connection went from 12000 to 7000fCFA (approx. 11 euros).

These obstacles to the penetration and development of the Internet in Chad violate international law, and make it impossible to achieve Sustainable Development Goal n°9c, which promotes affordable Internet access for all by 2020.

Legal actions taken to national and international courts have failed to restore the rights of citizens to access a free, open and affordable Internet. Faced with this situation, Internet Sans Frontières is calling on Internet users from Chad, Africa and the world, as well as to human rights organizations, to participate in an international and citizen campaign of actions for a open and accessible internet in Chad.

“The cyberbrutality and the locking of the digital space by the Chadian authorities clearly demonstrate the rise of authoritarian practices on the Internet. If nothing is done, the benefits of the Internet for democratic progress in the world, especially in Africa, will be reduced to nothing, “said Abdelkerim Yacoub Koundougoum, Central Africa Head of Internet Without Borders.

Chad is not the only country to intensify the crackdown on the Internet, and keep the costs of Internet access artificially high. Since 31 December 2018, the Internet has been completely shutdown in the Democratic Republic of Congo, and a decree signed on 1 December 2018 has increased the cost of access to bandwidth by 60%.

[…] Led by digital advocacy group Web Sans Frontières (ISF), the initiative requests officers to uphold the rights of customers and to cease interrupting the usage of platforms together with Fb, Twitter, Viber, and […]

[…] January 19th, activist group Internet Without Borders launched a global campaign to advocate for the people of Chad’s access to the internet and social […]

After a record 16-month ban this president has unblocked social media access - CrimeStopNews.Com

[…] a country where internet penetration already remains low. But activists say legal action along with international campaigns to end the digital blackout might have helped shift the situation towards a positive […]

[…] a country where internet penetration already remains low. But activists say legal action along with international campaigns to end the digital blackout might have helped shift the situation towards a positive […]

[…] the place web penetration already stays low. However activists say authorized motion together with worldwide campaigns to finish the digital blackout might need helped shift the scenario in the direction of a […]